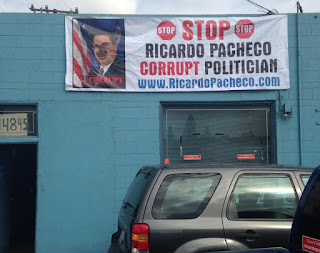 After Greg S. Tuttle placed a banner on his wall which says "Stop Ricardo Pacheco Corrupt Politician", the City of Baldwin Park, under the orders of Ricardo Pacheco, issued him a warning to take down the banner or be fined with a citation.

In response, the attorney, Carol Sobel wrote a letter to the City that having such a banner was an expression of Free Speech and that the city was in violation of the Constitution to fine someone for presenting it.

After receiving the letter, instead of withdrawing the warnings, the City ignored the letter. Then, the City instead issued a fine to all those who had the banner.

I don't know if my readers are getting bored of reading the same types of First Amendment retaliation stories on my blog. But, it's almost always the same type of response in Baldwin Park. If City officials or directors don't like what you say, they try to bully you into taking back your speech. I mean, how many more lawsuits and court orders do we need, to educate the city officials that the people of American have the right to speech, even if it is offensive or distasteful.

Long time readers from my blog will remember the Mayor sued me for a restraining order because I booed him at the park. Judge said I had First Amendment rights.

The Mayor also ordered me arrested, strip searched by a woman officer, and jailed me for passing out leaflets. The City was sued in that case and settled for a good sum of money.

Then, two council members and the Mayor sued my client, Greg Tuttle, because he was watching what they were doing at their corrupt conference in Santa Barbara. The judge told them, again, that citizens have a right to Free Speech and to participate in democracy.

I don't think the Mayor of the Council Members in this city are ever going to get it.
Posted by Paul C. at 2:42 PM