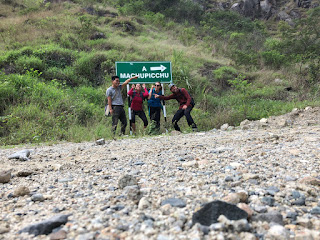 The day was hot, really hot actually, when we walked from the small town of Santa Teresa to the town of Hidroelectrica. It was a three hour hike, where we walked through a valley. There was a blue stream that flowed like a serpent through the valley. Behind us were strong and magical emerald mountains that surrounded us. Behind one of them was where Machu Picchu lied. The sky was open and blue, and the sun was blazing hot.

We woke up at 07:30A. As usual, I saw Alex making our breakfast already. People looked hung over. The Uruguayan told me that breakfast was really good. It was pancakes and fresh cut fruits - mainly papayas.

After breakfast, our group was split into two: those who did zip lining and those who didn't. Only five of us chose not to do zip lining; so they "punished" us by making us by walking three hours more to Hidroelectrica. The group who paid for zip lining, which was about $30, got a ride to Hidroelectria. There was a lot of peer pressure and pressure from our guides to do the zip lining. All of us were tired from hiking up Salcantay, so it's easy to see how walking three hours wasn't welcome.

But I wasn't going to do ziplining. I'm sure it was a waste of money. $30 could get you far in Peru, and I didn't need to spend it. So - we walked to Hidroelectrica - which was a beautiful hike - except that it was hot. It was the hottest day I felt in Peru so far - and I liked it, because I'm from Los Angeles.

We walked up the dirt road, and it took us two hours to get to Hidroelectrica. Some of us took off our shirts. I did. I was getting really sweaty. I asked the Spanish girl to slather sunscreen on my shoulders and back. I didn't want to burn.

Walking into Hidroelectrica was like walking into a small town in America's Wild, Wild West. From above the balcony, our guide was already there, looking at us from above. He shouted us to come up.

There, we took off our shoes. My socks were wet and sweaty, and I'm sure didn't smell good. We sat at a table at the top of the balcony - and from above, we could see the new tourists walk into the small and shanty town of Hidroelectrica.

Our group came about an hour later. They talked about how fun it was to zipline, and how different people were afraid of heights.

At the little restaurant, we ate lunch. I shared lunch with the German girl. We had rice and trout and beef and a nice soup. The soup was full and rich and had a lot of texture with rice and lentils. They made a wonderful spicy salsa out of peppers, and it was really tangy and fiery.

We had passionfruit juice to drink. It was sweet but not too sweet - which tasted heavenly - especially against the raging heat.

Our guide instructed us again about how to pack our stuff. Again, there were two groups. Our groups were always split between two - one who was willing to spend money and those who weren't. The group willing to spend money was taking the train from the town of Aguas Caliente back to Cusco. It's only a three hour ride by train. Otherwise, you have to walk another three hours and take a 6 hour + ride back to Cusco. (You see how they make you suffer, if you don't want to spend money. All the good roads and tracks are owned by monopolies; so you have to walk for hours if you don't want to take the train.)

A stream of people had finished seeing Machu Picchu and were walking towards us. I had a lot of energy from eating. So, I was walking very fast through the forest and through the streams and through the jungle. Some times, I would walk on the planks of the railroad tracks and it felt hard and strong to step on those planks. Some times I would hike on the softest part of the trek.

My group wasn't happy that I parted with them. But I felt like I needed some alone time too.

It was perhaps some of the best time on trip; to have two and a half hours to myself. There were 21 of us, and we were always together. I liked being by myself - alone - with the forest, the river, the shade and the sun, the parrots, the gravel tracks, and even the screaming train that would come and go.

Sometimes, the large blue train would chug through the tracks, and the conductor would yell at all of us to stay away from the train. Motorbikes and bicycles are prohibited on the track too; this way the train has a monopoly to gouge the tourists for more money.

I flew in focused into Aguas Caliente. It was a town built solely on tourism. The only shops there are food shops, restaurants, and hotel.

Aguas Caliente has no cars or taxis or mototaxis or bicycles. There are only buses, which are expensive, and take you to the entrance of Machu Picchu. If you don't want to pay, you have to hike one hour up to the entrance.

I sat outside a cafe. I drank a cold beer. I waited for my group. When I caught up to them, we checked into our hotel together. I shared a room with the Germans.

We had an hour or two to explore Aguas Caliente. Then dinner.

At dinner, we ate at a proper restaurant - which charged us a lot for drinks. The food was part of the tour - so we didn't have to pay more. People weren't enjoying dinner, because we were focused on instructions for Machu Picchu tomorrow. (For dinner, I had trout - which wasn't as good as the food for lunch in Hidroelectrica.)

At dinner, the guides passed our tickets. They gave us instructions for Machu Picchu, such as making sure we had our passports (otherwise, we wouldn't be allowed in). Again there were two groups - one willing to pay for the bus to the entrance and those who had to walk.

The walking group would go together at 04:00A tomorrow. We'd meet at the lobby of the hotel.

After dinner - I bought some water and snacks and returned to the hotel. We went to bed at 09:30P. I forgot to set my alarm. I remember very little, because I fell asleep so early. It was probably because I burnt all my energy flying through the forest - which I enjoyed.

Tomorrow, I would see Machu Picchu.