The next day, in the evening I visited my old judo club. I was so happy that it grew with so many more people. One of my Senseis, a white guy named Cameron, spent the whole time catching up with me. He taught me the most in ground fighting and strangling people out back in the days. I saw some old faces. One guy named Matthew called out to me - "I remember you!" They call him "Sparkles" now. He was just a kid, about 15, when I left and a green belt (which is about half way to black). Now, he was a black belt. (I won't tell you which belt I am, but I graduated a degree after I left NZ). I have to say an amazing feeling came over me to see that the club had grown. I appreciated seeing all the new faces. A Russian teenager wanted to talk to me, so I spoke to him in Russian. He was like where did you learn?! Although my part was small in growing the club, I felt like I contributed too in the growing success of it. Most of the leadership fell on Cameron, and he did and was doing an astounding job.

I enjoyed one comment that Cameron made about Matthew. He said although Matthew wasn't the best technically, he had the courage to go up against much heavier players than himself and a lot of times he won. Not all the time, but when the odds were against him he wasn't afraid of going to mat with his opponent. If that was all I heard at my time at the judo club - my trip there would've been worth it. But it got better.

Seeing everybody made me really miss the club, and I told everyone I would come back soon. After training, Cameron took me to eat at a place that was a 3-minute walk from my old house. It was Indian. Cameron was generous to pay for my meal. Nothing beats Kiwi-Indian food. I don't know why it tastes so much better there. I had butter chicken and garlic naan. The creamy butter chicken sauce was out of this world. I wonder if it was because of the high quality dairy product. I've had Indian food in Los Angeles, San Francisco, and London. It's still best in New Zealand for some reason.

The waiter was talking to me. His family owned the restaurant. He said he was doing his Masters in Strategic Studies in Victoria University. Cameron had a fantastic memory and said, "Did you know Paul graduated with that years ago?"

I told him about the program a bit and all my old teachers. I don't know how much it's done for my life to be honest. Probably most people with Masters would say the same thing. Most of my knowledge of strategy has come from experience and mentorship. 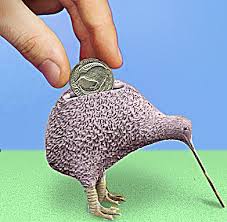 I had a Kiwi piggy bank I forgot to break. Before I left to New Zealand, I broke it open, and I had a heavy amount of Kiwi change. My mom was watching me separate out all my money and was finding it all interesting. I had some Aussie coins in there too that I was separating out and not bringing with me.

Before lunch with Matthew, I deposited my money in my Kiwi account. My bank card didn't work! The lady looked at it and said, "I haven't seen a card like that in ten years!"

"Well, I guess it's been that long since I've come back to use my bank account." The bank tellers issued me a new card.

They counted up all my money. I had $64 NZD! Sweet. (That's about $38 USD.) I used most of it to buy coffee during my stay there. My final purchase was a pinot noir for my professor back in the States. I bought him a beautiful wine called Pick and Shovel from Central Otago.

Earlier in the day - my friend Matthew bought me lunch by the beach. We sat outside. I had a sandwich and glass of wine. I asked him if it was ok if I took off my shirt. Can you imagine a person shirtless at a restaurant? But it was by a beach on a summer's day and nobody seemed to mind. I wanted to tan; so, everyone would know I came back from a holiday.

Lunch was short. We caught up. I wish we had more time. But that was all the time in the world we were going to have, at least for now.

Later in the day, I met with an old friend Paul - who is probably one of the richest people in Wellington. He's an entrepreneur, who invests in the poor overseas, mainly Bangladesh and India. We walked to the park together. He put on a hat. I didn't.

I did most of the talking, and him; the listening. Paul wanted to know what I was doing back in the States. I told him about my cases and my sabbatical. Most of the time was taken up with my stories.

But here's one thing he told me that really hit home. He said to me, "The principle in spending money and living life is that you should live your life in a way that maximizes the good you can do for others and the world." That was important for me to hear.

That was all the time I was going to have with him.

On another day, I had lunch at one of the best cafes in Wellington called Neo. The owner is a friend of mine. I had the best chicken salad in my life there. He told me that he uses thigh meat, which doesn't go dry. He brines it. Then he dips it in buttermilk before coating it in breadcrumbs. Because I don't eat much bread, I had him put the chicken in a salad, and I drizzled extra dressing on it.

The friend I met was Neil. He's a scientist. We caught up some. I'm grateful he made the drive out from a little further away and bought me lunch. Neil was telling me that he was working on a project about a farmer woman who has visions of Heaven. Very interesting.

In between meetings, I caught up with former boss, Brett. He bought me a cappuccino, which tasted wonderful. His daughters had grown up. He moved up as a director. I told him about my time in law school and as a lawyer. That was all the time we were going to have on this visit.

Finally, I spent the rest of the time with Catherine's family. We had dinner together. Spiros was there too. I could feel the time slipping away from me. It was like watching the sands of an hourglass fall the bottom. Two of their adult children sat with us at the table. We held hands, as a family would, and I prayed for the family. And they prayed for me.

Because the airplane ticket was way overpriced to Auckland, I had to buy a bus ticket. They took me to the bus stop. I brought the abalone with me, the most important gift I had. There, waiting for me, was Kirill. It was a really pleasant surprise. He figured out my bus stop and came to surprise me with a good bye. Really humbled by it all.

I gave everybody a hug, and I was on the night bus back to Auckland. It'd be a 12 or 14 hour ride. A flight is only 45 minutes. But the road is windy and through mountains.

That was it. That was my time in Wellington.

I was really humbled and impressed by everyone's hospitality and generosity. It was hard to accept, because on such short notice, I didn't even bring these people any gifts. In any event, special thanks to all those who welcomed me back!