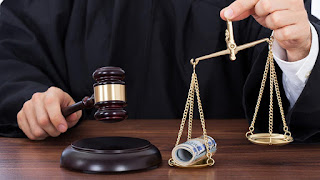 On two different cases, at the El Monte Courthouse, I objected when the government permitted  private lawyers to act as criminal prosecutor, which I argued violates both state law and our Constitution. The first time, my motion was denied. After appealing the judge, that judge denied that the ever motion was ever presented before him. In the second instance, my motion was denied by another judge. We have a trending problem in this country. When politicians can't get the public prosecutor to file criminal charges in a case, those politicians then waste taxpayer money in hiring private lawyers to act as a public prosecutor in order to maximize profit for lawyers and to intimidate citizens from speaking out against these politicians. The problem with this practice, as I'll explain below, is that it's unconstitutional.

The Baldwin Park School District hired two attorneys to criminally prosecute me for a traffic ticket, after I outed the fact that their school police chief, Jill Poe, was a fraudster, felon, and serial sexual predator. Poe was then hired to work amongst children as young at the age of five.

The school district was upset. First, they asked the District Attorney to prosecute me. But that didn't happen.

So they had to turn to illegal options. The District then  hired Alfonso Estrada, a partner of the firm of Atkinson, Andelson, Loya, Ruud & Romo. They also hired Sarah Lustig, an associate, to draft the papers.

The problem with this entire practice is that this firm probably charged $10,000 to $20,000 to prosecute a $238 traffic ticket. In short, money that could've been used to enhance the student's education was directed to a private law firm.

The Baldwin Park School District, which I was a student of, is a failing school district. The school district's performance is abysmal. U.S. News ranks Baldwin Park School District at 4,418. It says only 17% are college ready. Only 51% are meeting minimum literacy requirements. And only 17% are proficient in mathematics. So shouldn't we be spending this money on the students, instead of on private attorneys to punish a journalist?

Besides the financial misappropriation, this entire practice is unconstitutional. The 5th and 14th Amendment of the our Constitution guarantees us Due Process in a criminal proceeding. Traffic tickets are governed by criminal and not civil procedure.

The reason the practice is unconstitutional is that the accused has a right to have a fair and impartial prosecutor. The prosecutor has the right to drop charges or give the accused a reasonable plea bargaining. But if that prosecutor is getting paid per the hour, she will not drop charges and will drag out the case to maximize profits at the expense of the taxpayer.

Furthermore, in California, city prosecutors need to receive consent from the District Attorney to prosecute cases. Here, Lustig and Estrada did not do so.  And number two, school districts are not permitted to criminally prosecute people. Aren't schools supposed to be in the business of education, not punishing people criminally? (The latter is the job of the prosecutor's office.)

When I brought the issue before the presiding judge of El Monte, he denied my request without even analyzing the issue. Then, at trial, I brought it up again, and Villeza lied and said he didn't know what I was talking about. (The entire proceeding had to be the most kangaroo and corrupt affair I ever faced before a judicial officer. I ended up reporting him to the judicial council. More on him, later.)

This problem wasn't limited in my traffic case. The City of Baldwin Park also hired a private law firm to prosecute one of my clients, who was also protesting the City. (The case has been appealed).

So you know what I had to do?

I filed a writ of cert at the United States Supreme Court. In my petition, I asked one question only: Can a for-profit law firm, without supervision from the public prosecutor, be contracted out to criminally  prosecute  someone and still be impartial and fair under the Due Process clauses of the 5th and 14th Amendments? (What does a Defendant have to do to get a fair hearing in this town? Go all the way to the U.S. Supreme Court?)

If you read my writ, you'll see that this problem of private criminal prosecution is trending all over Southern California, Texas, and Alabama. For instance, in Southern California, the impoverished City of Indio hired a private law firm to prosecute an older Hispanic lady for having too many chickens. She was fined $4,000. This practice is really outrageous, bad for society, and only benefits these private law firms that have nothing else better to do but prosecute old ladies with chickens, an activist who didn't run a stop sign, and other activists who put up signs of politicians.

I'm presenting this problem at a time, when all around the world, a state of emergency has been declared. Nonetheless, this doesn't excuse the government from providing us with Due Process to challenge its power. John Cusack once said, "It's a very frightening time when something as basic as due process is seen as somehow radical."
Posted by Paul C. at 3:30 PM