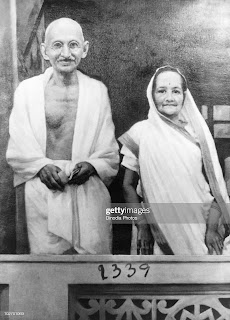 I never suspected that Gandhi had such a bad fight with his wife, Kasturba, who he affectionately called "Ba". (Incidentally, Gandhi had an arranged marriage at the age of 13). I just read an insightful piece by Gandhi about reconciliation and his wife that I wanted to share today on Christmas day

Now, most of you will know who Gandhi is, but I have a lot of readers on my blog. One day, a 19 year old asked me who the photo was on the book I was reading? I said, "Gandhi." He asked, "Who's that?"

In short, Gandhi was an Indian native, London-trained lawyer, who led the nonviolent revolution against the British empire to win India its independence. A Hindu extremist (though the Indian Times now disputes this) assassinated him, glorifying Gandhi as a martyr.

Gandhi's been elevated to a saint; so, I never thought he would have such a vicious argument with his wife. To give you some background on what happened, Gandhi and his wife both belonged to the merchant class family in India at a time where the caste system was officially in place. The lowest class of people were untouchables. The Hindus believed that the untouchables were cursed by the gods and reincarnated as the dregs of the earth. To even drink water from the same well meant that one would become cursed. So they weren't touched; hence, the name untouchables. (Gandhi incidentally called them the Children of God.)

While Gandhi was practicing law in South Africa, he didn't have any plumbing in the office. He didn't believe in having servants. So, they emptied the chamber pots of even his law clerks. If you don't know what that means, it means they defecated in pots and had to be emptied and cleaned. Gandhi and wife served his employees by doing so.

First, you have to think how humble Gandhi was to empty the chamber pot of his employee, as a lawyer and employer. I don't think I could do it. And his wife didn't have a problem with it, except when it came to a Christian law clerk who was from the untouchable class. Ba didn't want to do it. So, Gandhi forced her to do it and commanded her to do the duty cheerfully.

Ba shouted she was leaving the house and all the intolerable rules. So Gandhi grabbed her by the wrist and took her to the gate.

Ba, with tears streaming down her face, told Gandhi, "Have you no sense of shame. Must you so far forget yourself? Where am I go to? I have no parents ore relatives here to harbor me. Being your wife, you think I must put up with your cuffs and kicks? For heaven's sake, behave yourself and the shut the gate. Let us not be found making scenes like this!"

Fast forward over 20 years later. Husband and wife are back in India.

As a result, and predictably, the British arrested Gandhi, his followers, and Ba. She died in prison serving Gandhi and the cause of Indian (both Hindu and Muslim) independence.

Merry Christmas to everyone.