On Trump or Clinton? 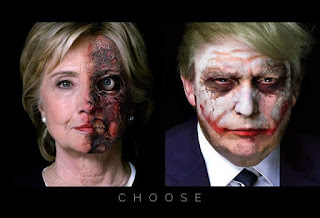 I've said very little about our national elections, and I'm still going to say very little. But to not say anything wouldn't do justice to my international audience, and believe it or not, I have a lot of international readers: mainly from these three countries - Germany, New Zealand, and Russia.

I'm going to say two things about this election. First, I no longer have faith in the democratic vote in the United States. After discovering the vote-by-mail fraud in Baldwin Park, I figure my vote doesn't count. So, why even vote?

Some may say the voting fraud is localized to Baldwin Park. Ha!

Only if you knew how many experts across the country have been contacting me about what I know about voting fraud. We've been exchanging notes. I think the entire system is rigged (but more on that later).

If you don't believe me, investigative journalist Greg Palast proved how George W. Bush rigged the Florida election. Although the British papers published his article, the American ones wouldn't, until months after the election was finished.

Essentially, Jeb Bush, brother of George Bush, was governor of Florida at the time. Him and the Florida Attorney General and a company called Choice Point eliminated a number of black, democratic, and Hispanic voters by labelling them felons, when they weren't. Felons aren't allowed to vote in Florida. Presto! You kick off all these democratic votes.

Second thing. Although I'm only 34 years young, this is the ugliest, nastiest, and most uncivilized presidential election I've seen. From the primaries onward, everything has been about tearing and destroying the competition, instead of speaking about merits and facts. Really, we as a nation have to think long and hard about why we accept character assassination as a form of truth and as a quality of someone we want as a leader.

It reminds me of our local politicians here. Whenever we tell them truths they hate, they call us names, ranging from fabricator, wife beater, and being a person with an ax to grind.

No matter what happens, as a seer and an oracle, I can guarantee what's going to happen tomorrow for this county. Believe me. Listen carefully.

I know. I know for sure and certain.

And it's this: The sun will still rise tomorrow.
Posted by Paul C. at 5:10 PM