Mayor Desperate Enough to Seek Restraining Order Against Me

The City of Baldwin Park has reached new lows.  Now they're perjuring themselves in court and saying that I yelled at the Mayor at a restaurant and stalked him.  None of this is true.

According to the City Attorney, Tafoya, (the same one by the way who has committed an illegal act in our second lawsuit - more on that later) - “As soon as (Cook) was released, he went and, what we describe as, stalked the mayor,” Tafoya said. “(Cook) went to a restaurant in the city of Baldwin Park and waited for the mayor to come, but police did not arrest him because he had left before police got there.”  The Tribune wrote the story up here: Mayors get desperate to seek restraining order before he gets exposed

How did I know the Mayor was at the restaurant Via Mar?   Yes, I have magical god given mystical powers that help me know where everyone is at once, just like the little girl in the TV show Heroes.

Ok, I'm being stupid.  The answer is that I was released from jail at 9:30 pm, just long enough so the concerts at the park was over.  I checked my cell phone.  My boxer, Lyle, texted me at 9:20 pm and said come to Via Mar, which is walking distance to the jail and also from the park.  It's actually half way in between.  Julian was also there.  Julian likes eating there.  Anyways, here's the screenshot of the text message from Lyle. 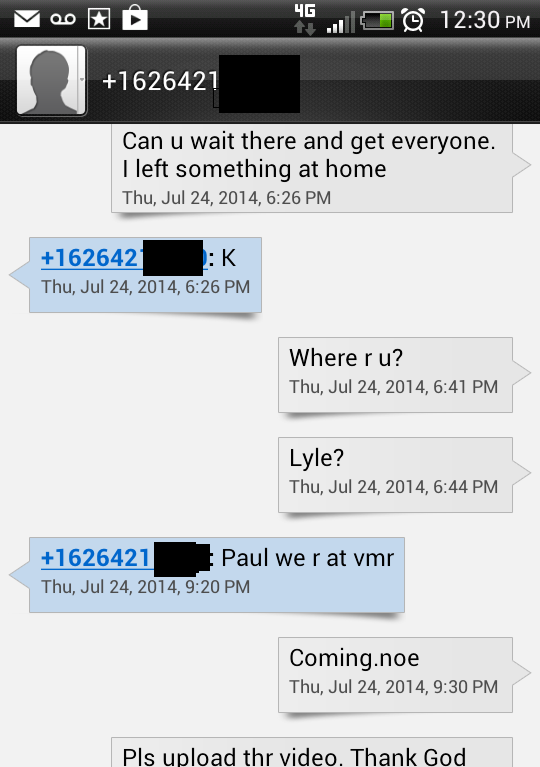 I mean, isn't it suspicious after they arrest and jail me for disturbing the assembly, that they can't arrest me for criminal threats?

And you could have arrested me on Thursday night when I went home.  Or how about Friday?  Or how about Saturday?  Or how about Sunday  Or even how about Monday?  But no - you serve me with an emergency restraining order on Monday for Tuesday.  And Tafoya does this on Monday, so I only have 24 hours to prepare instead of having the weekend.  And when I ask for the complaint against me, he won't give it.  Does any of this sound credible to you?

After I saw that Julian and Lyle were not at Via Mar I bumped into the Mayor at the back entrance.  I asked him, "How do you like getting me arrested?"  He was silent for a few seconds.  Backed away.  Then he said, "Stay away from me."  I continued walking to my car, which was still parked at the park.  Then, I saw Julian.

If I had known that confronting the man who was to throw me into jail so that I would shut up and not pass out my articles would result in them lying and saying that I could read minds and know where the Mayor is all the time, I obviously would've video recorded it.  But now, I know for certain we aren't dealing with normal people here.  We're dealing with desperate people who have resorted to lying and cheating (but they were always stealing).

Me approaching the Dais was to serve lawsuits.  They are all growing to hate this practice but need to be served more lawsuits in the public forum.

Baldwin Park's is getting more and more desperate.  And now they're abusing the court process to chill my speech.