My Days and Nights in Istanbul

These events all took place while I was thinking about my life in Istanbul - the mystical city that shows you a sliver of the world that can be found nowhere else.

After my nights in the Turkish wilderness, I caught a flight to Istanbul - formerly known as Constantinople, named after the former Christian Roman Emperor who christened the city the new capital of the Holy Roman Empire.  Before him, the Byzantines owned the city.  After him, the Muslims took it under the banner of the Ottoman Empire.

I arrived into Istanbul and found a host from couchsurfing.  (Couchsurfing is a website that allows people to open up their homes to complete international strangers.)  We'll call the Turkish girl Asli, but that's not her real name.

I arrived into Taksim, the central business district of Istanbul by bus.  I met Asli at a grand hotel, where she worked.  The first thing I noticed about her is that she was much fatter in person than in her picture.  (Of course, I could call her overweight, big boned, healthier, and much more.  But the reality is that all these words cover up for the reality that people all around the world are eating more than they should.)

I felt uneasy around Asli.  I couldn't understand why.

After work, she invited her other friend, who wore a domino patterned dress with a red belt.  She was fatter.  The calves of her legs looked blobby.  They were both clearly moving towards obesity.  Nonetheless, the friend had a funny personality as she was animated and laughed quite a bit.  But even though they were both fat, they had milky skin and black eyes in the shape of large almonds.  It's a feature in a people that is not commonly seen.

I saw many fat people in Istanbul, except for the Syrian refuges.  I have my doubts now that per capita America is the heaviest nation.  Perhaps, Turkey is.

Going back to Asli.  It was Ramadan.  Ramadan is a holy Islamic holiday, in which its followers must fast from sunrise to sunset for an entire month.  They must also fast from smoking, drinking, and other sinful activities, like sexual intercourse.  In Turkey, some people fast; some people don't.  In conservative Arab nations, like Saudi Arabia, fasting is almost compulsory.  Therefore, Asli's mother was fasting; while Asli and her friend were not.

We took a taxi to her home and then her mother's home.  Her mother was preparing a Ramadan meal for us.  Asli told me she got married at 17, was divorced, and had a child.  Uh oh, I thought.  I hope she doesn't expect anything from me.

At her mother's house, her mother made us a Turkish meal.  There were beef lungs in cubed pieces, soup, bread, grape leaves, and deep fried cheese rolls.  Several times during the meal, Asli and her friend touched me on the thigh.  The mother seemed disappointed I didn't eat so much, but this is why these people are fat.  They eat too much.  I told them, even before the meal started, "I don't eat much.  I'm small.  I don't need so much food."

When went back to her place, she gave me a couch to sleep in.  When we arrived at home, a guy who was thin, had long hair, and wore glasses met us.  He seemed to like and actually was into video games.  She didn't tell me, but that was her boyfriend.  He and I slept on separate couches in the living room, while Asli and her friend slept in the bed.

Ismail my guest was a new pharmacist.  He took the day off from the shop of his father, who was also a pharmacist to spend the day with me.  To my surprise, he also did boxing.

Although there were the usual touristy things to see, I wanted more than anything to see the Modern Art Museum.  So - that's where we started our tour.

The Modern Art Museum was interesting.  It had interesting and strange movies.  I really enjoyed this Turkish Islamic modern cartoon, which told this modern fairy tale.  There was so much nudity in the cartoon, both male and female, I was shocked that such a cartoon would be allowed to play in a Muslim Nation.  Nonetheless, the artist was brilliant.

During the day, we did all the usual touristy sites. There was the Aya Sofia, which means Holy Wisdom in Greek.  The Church was built by Emperor Justinian and dedicated to the Jesus godhead of the trinity.  In actuality, it was his wife who commissioned the building of the church.  When Mehemmet II took Constantinople, the first thing he declared to be done was for the church to be converted into a mosque.  As a result, a number of the Christian art has been plastered over and there is Arabic calligraphy hanging over the Mosque corners, which reads: "Allah."

My favorite place of the church-mosque is on one of the wings.  There, broken light streams through the windows, leaving you in a solemn but peaceful, reflective state.  It reminded me of the way that sunshine streams in through the forest canopy.  I told Ismail, I could do my legal work in a place like this.

After seeing the Church of Holy Wisdom, we saw the Blue Mosque.  We just sat in the courtyard, which made me feel like I was in a movie.  It was a grand, grand courtyard with a number of tourists sitting around it.  The courtyard was a perfect square.  I wasn't allowed into the mosque because I was wearing shorts, and the guy guarding the mosque entrance clearly knew I was not of their faith.

After seeing the Blue Mosque, we went to see the bazaars, which were full of what I called "Mosquito People."  I've been fascinated by a concept called therianthropy for awhile.  Therian in Latin means animal.  Thropy means change.  So, it's the ability for a human to change into an animal.  The most common type of therianthropy is known as lycanthropy.  Lycans are wolves.  So lycanthropes are werewolves.  These Bazaar peopl were the Culcidatethropes.  Culdiae are mosquitoes.

Unlike the werewolves, the Mosquito People only come out during the day.  They have special sensors, like mosquitoes, to try to suck the blood out of tourists.  And I've never been panhandled or hawked by Mosquito People like those at the bazaar.  Even if you look at an item, longer than a second, they call to you and make you already feel like you're obligated to buy it.  The Mosquito People will do everything to suck you dry of your money.

After seeing the Grand Bazaar, we saw the Spice Bazaar.  I loved the smell of roasted spices.  But again, you still had the Mosquito People.

And after the Spice Bazaar, Ismail took me to an aquarium store.  He told me he had an aquarium.  So, for spending time with me, I picked out a guppy with a fiery tail.  I bought it.  I gave it to him.  I said, "It's lucky both in Chinese and Korean culture.  The Koreans say bringing clean water into someone's home is like bringing luck for them."

After the Spice Bazaar, we went to Ismail's home, which was close to the central business center.  There, his parents came.  I met his parents.  They invited me to dinner.  We waited until the prayer call was announced at the local Mosque through a blaring stereo.  Then, we ate.  The food was mainly vegetarian.  I liked the stuffed eggplants.  But the best part, was the summer sweet watermelons.  The flavors of sugar water exploded in your mouth when you chewed through it.

Afterwards, Ismail took me on his motorbike through the winding streets of Istanbul.  Near Asli's place we sat in the town square - where tables were set up.  We drank of hot Turkish tea with sugar.  The flavors are intense and aromatic.  Then, we watched people light fire lanterns.  You make a wish when you light a fire lantern.  I loved watching them fly through the Istanbul night sky.  At some point, when they get far enough, they look like red fire flies flashing through the night.  Then, I heard the final prayer call at night, which was closer to 11 pm.  (The Muslims have five prayer calls a day, starting at 4:30 am.  You can hear it from any corner of the city because every block has a mosque.)  All this for Ramadan.

Afterwards, we went to a park.  We stayed out all night long, smoking hooka, which is tobacco that is filtered through a water pipe, and talking.

But I was hungry.  I didn't have lunch.  And I was waiting for Ismail to eat because the sun set at 8:40 pm.  I picked a restaurant.  We sat at a table.  A famous celebrity belly dancer sat next to us with three men.  She had very masculine features, like her face and hands.

I asked my host if I could take a picture with her.  She said, "No, do you want to get killed?  Those men sitting next to her are Turkish mafia.  They've been in the news for suspected killings."

I ordered a beef sausage with rice.  It had the taste of strong roasted spices.  When you bit into the meat it released juices and had a stronger gamey taste from the grass fed beef.  It was a shame I didn't have red wine to wash the flavors down with.  I loved the food very much.

We stayed out all night.

So, when we got back with Asli the boyfriend didn't open the door.  In fact, when we came in, he started screaming at her for being out with me all night.  At points, his voice cracked.  I didn't need to know Turkish to start thinking he was going to hit her.  But he did not hit her.

The next morning, he blocked me from using the internet.  That was how I ended up my night in Istanbul.

Anyways, that's how I ended my final day in Turkey.

The Aya Sofia - the Church of Holy Wisdom.  Notice the Arabic Symbols on the top.

The Cats of Istanbul 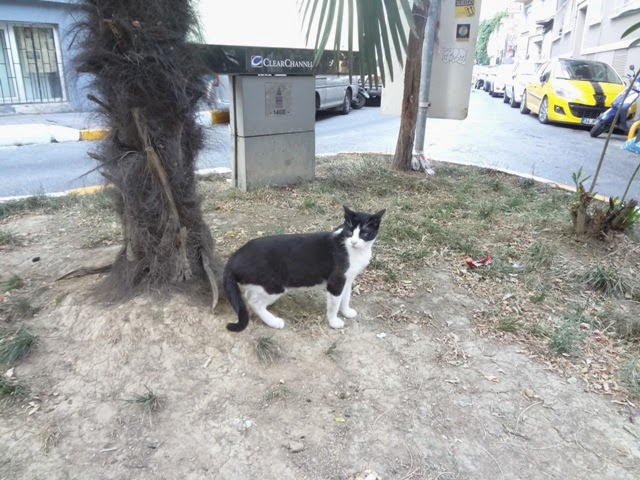 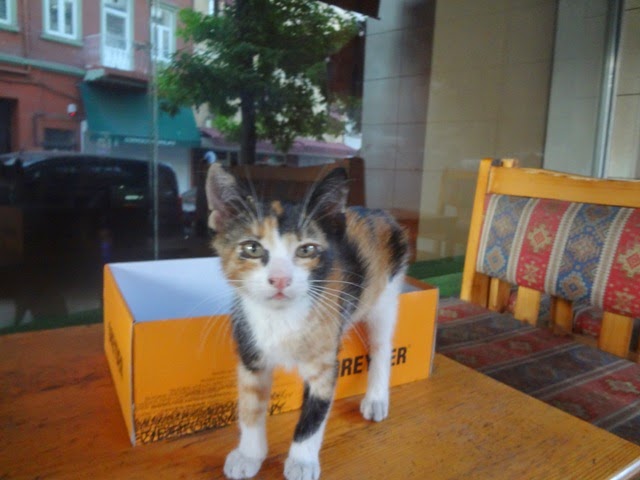 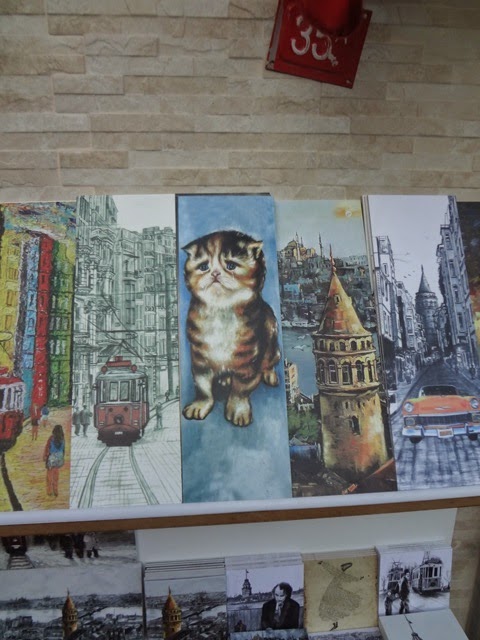 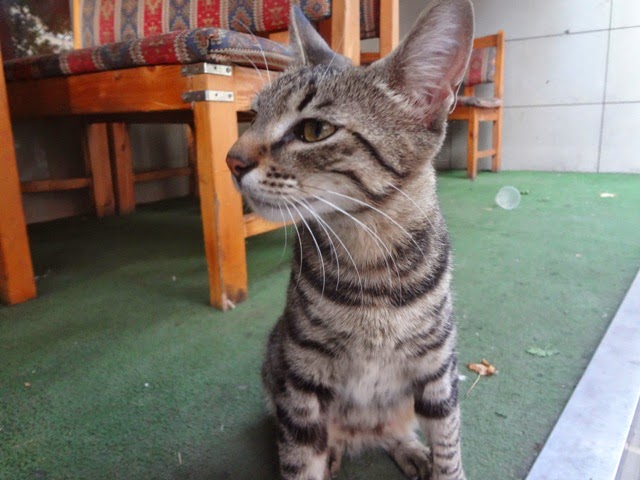 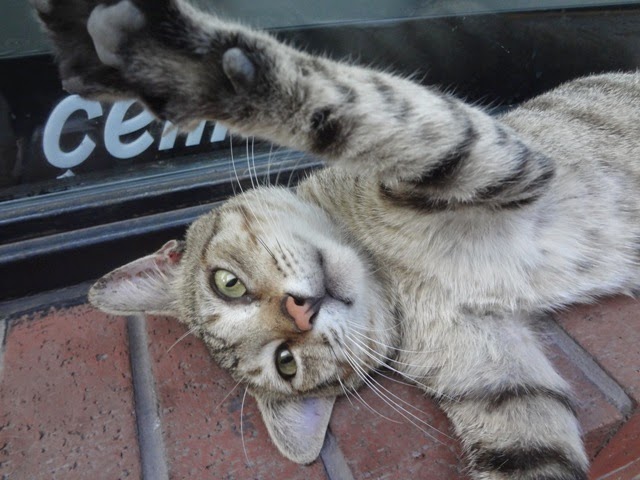 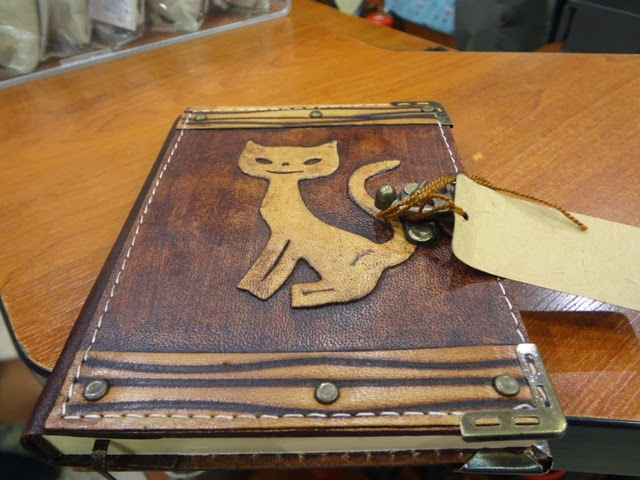 Ok, here's my favorite cat picture I took.  The kitty's hiding behind fig leaves - just like Adam and Eve did. 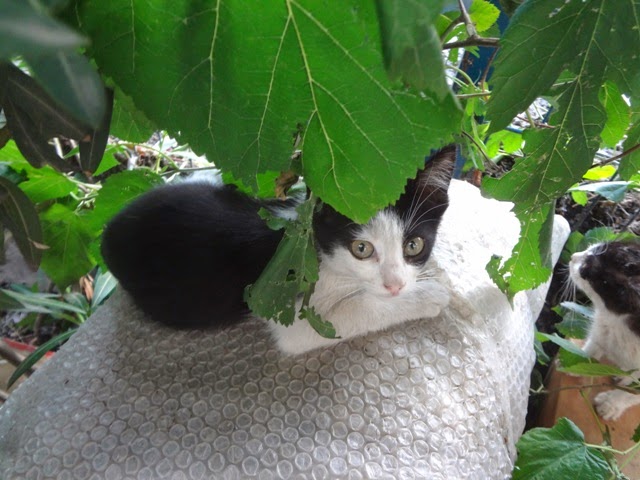 And then, I was trying to take this cat's picture.  But these Syrian refuge kids wanted me to take their pictures with the cat.  Then they asked me for money; so, I gave them 50 cents. 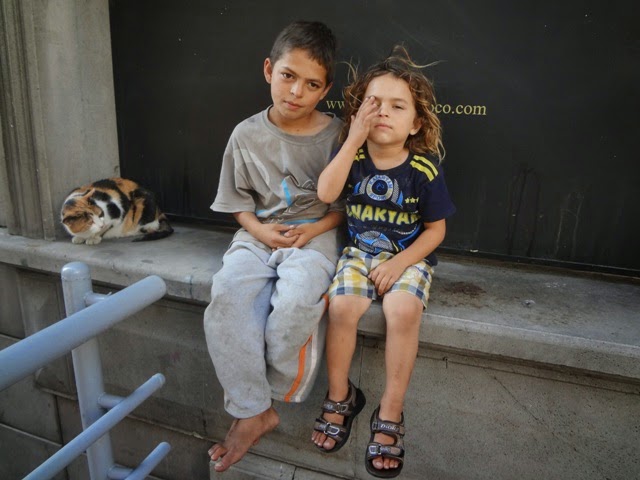 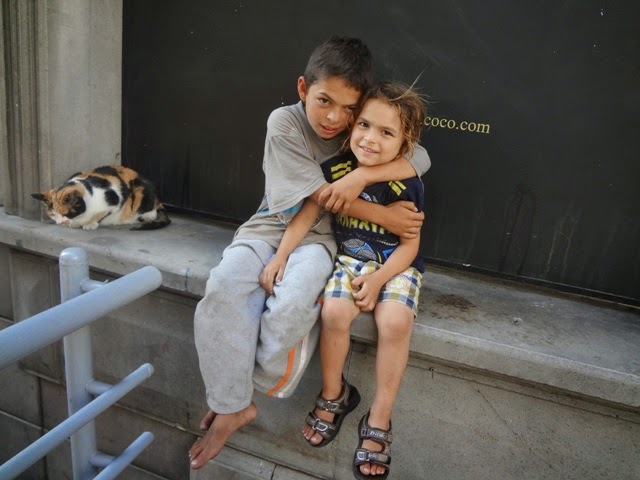 But they look happy with each other. 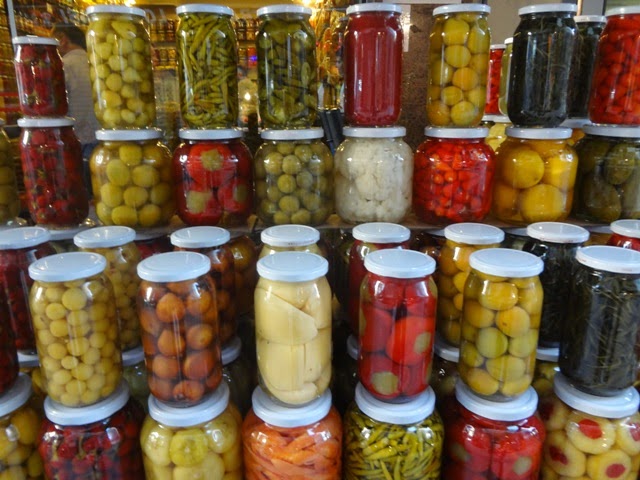 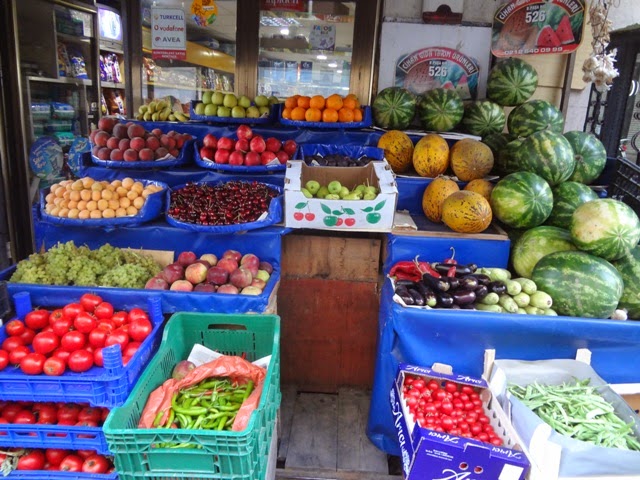 Ramadan is also a time of celebration.  And in the evening, the people light fire lanterns.  These two pictures are probably my favorite pictures I took in Istanbul. 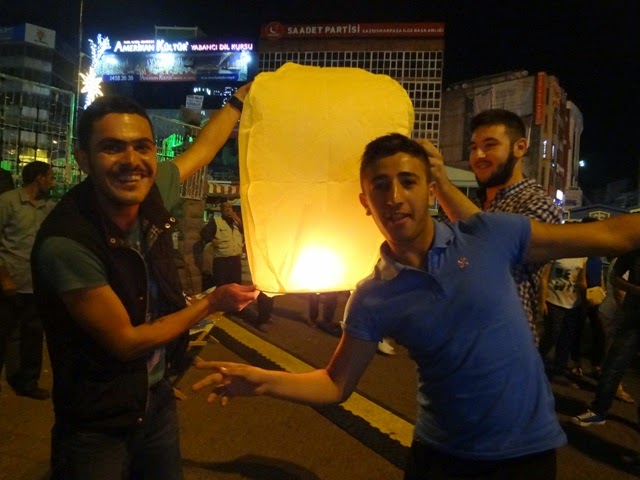 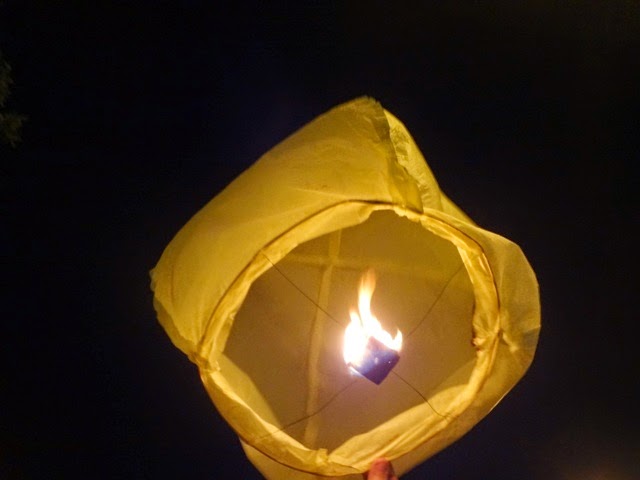